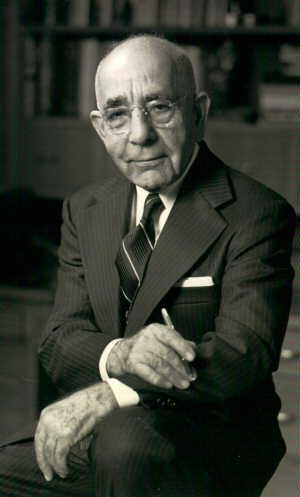 Leon S. Peters graduated from high school in 1923. His family, of Armenian descent, started farming in the San Joaquin Valley. Some years later after the loss of his parents, Leon went to work as a salesman for Valley Foundry in 1929. Seeing the potential of the company, Leon purchased it from the owners. He went on to lead the company through change and expansion until Valley Foundry and Machine Works became a world recognized supplier of equipment to the agricultural industry.

During those same years, Leon S. Peters assumed leadership positions in numerous organizations. The new Leon S. Peters Business Building at California State University, Fresno honors the spirit of the man who served on the University President's Advisory Board, the California State University, Fresno Foundation Board of Governors, the University's Agricultural Board, and the Business Advisory Council of the School of Business and Administrative Sciences. It is the spirit, that commitment, that entrepreneurial vision - of Leon S. Peters and so many others throughout the School's history - that have laid the foundations for a new beginning.