Entrepreneurship After the Startup 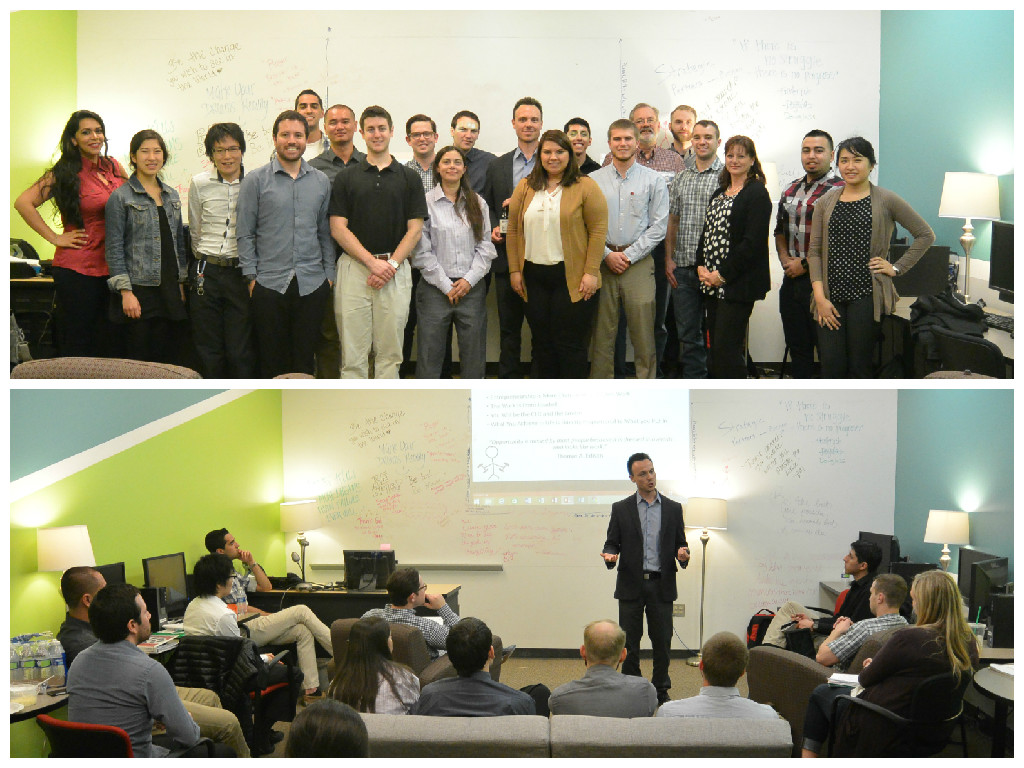 “Attack your weaknesses and don’t settle on your strengths….hone your craft, and continue sharpening your mind…you will fail, suffer, and cry, it happens all the time, but admit when you’ve failed, then: Reinvent. Adapt. Conquer.”
-Garrett Jones

At this week’s meeting for the Laval Entrepreneur Mentor Program we were delighted to have guest speaker Garrett Jones, President of Laval Underground Surveys, LLC. It was very apparent to the Laval EMP young entrepreneurs that Garrett has a passion for entrepreneurship. It explains his previous involvement as a Board Member of the Lyles Center for Innovation and Entrepreneurship; current involvement as a mentor for Laval EMP students, and his support/volunteerism for Valley Children’s Hospital, the Smittcamp Family Honors College, and the Lyles School for Engineering.

At the age of 33 Jones has already proven himself as a serial entrepreneur. He spearheaded the launch of Bulldog Root Beer, which was originally brewed in Fresno, CA and rose to become the #1 consumer ranked root beer in the United States. Because of his successes with the Bulldog Beverage Company, Garrett became highly sought after as a product development specialist and consultant. As President and Managing Partner of Laval Underground Surveys, LLC, he manages the global manufacturing and sales of underwater video inspection systems for three industries: mining, oil, and groundwater. His company continues to pioneer new technologies for underwater transmission throughout the world.

The Laval EMP students took a lot away from Garrett’s presentation. The overarching message from Mr. Jones is figuring out what we, as entrepreneurs will be facing when our business is no longer a start up and has grown into a developed company. When growing past the beginning phases, Garrett suggests we “delegate and delegate appropriately,” the latter being an important factor commonly missed by business owners. Even so, with obstacles we are bound to face we mustn’t, “forget basic necessities making us a business and persevere,” which Garrett explains as what commonly separates the good entrepreneurs from the great entrepreneurs.

Without saying so, Garrett made it very clear as entrepreneurs we must grow as much as our business, or the business we are working in (intrapreneurship). To grow, Garrett suggests we be open to constructive criticism, embrace change, and simply put in the work. He says, “Attack your weaknesses and don’t settle on your strengths….hone your craft, and continue sharpening your mind, you will fail, suffer, and cry, it happens all the time, but admit when you’ve failed, then: Reinvent. Adapt. Conquer.” Garrett adds in order to do so we must map our successes.

During our Friday meeting we also had the opportunity to hear from mentee, Connor Alstrom, about his entrepreneurial journey. Connor had early entrepreneurial success winning a competition on his business idea, although his understanding of entrepreneurship didn’t come until college, where he dove head first into his major Business Administration – Entrepreneurship option, and is continuing in his 5th semester as President of the Collegiate Entrepreneur Organization.

We’d also like to thank mentee, Vinni Hoke, for creating a partnership with Rosa Linda’s Cuisine and bring some delicious traditional Mexican food. Laval EMPers enjoyed enchiladas, rice and beans. You can indulge as well by visiting one of their three locations: Selma, Fresno, or Clovis. Explore the options at rosalindascuisine.com.